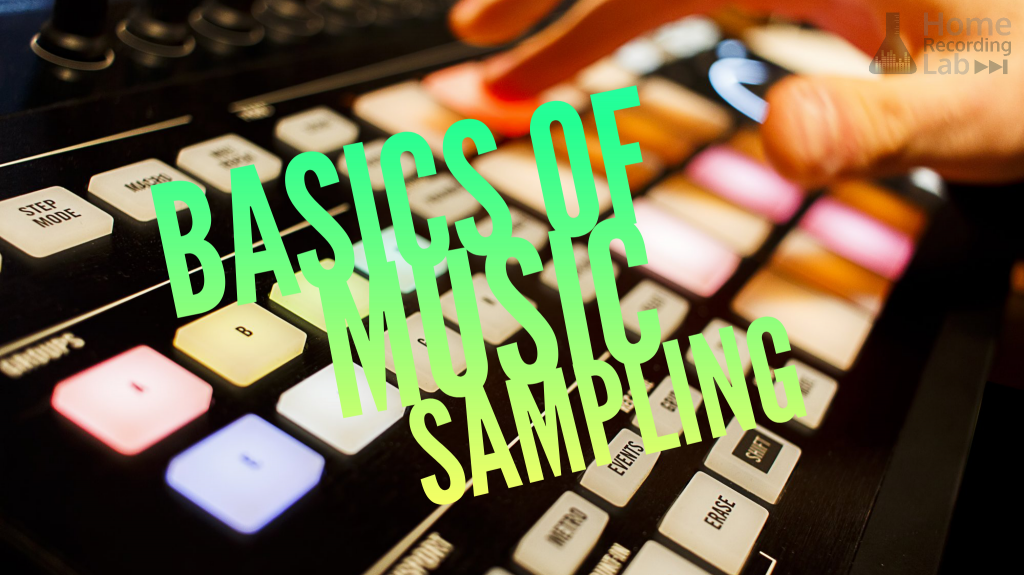 Sampling is a commonly used compositional device in recorded music. The practice can basically be described as taking something from a recording and using it for your own. The length of samples can range from an entire song to a small snippet of the music, and many producers will take just an individual snare or kick drum from a recording.

This article is going to cover the basics of software and hardware samplers, hardware beat controllers, and what you need to know to get started experimenting with sampling for your own projects.

The art form became much more accessible to people and the release of these affordable samplers really helped take hip-hop to new heights in terms of creativity.

Drum loops are the most common reason that people use samples. Producers find it much easier to use great drum sections of songs that were previously recorded as opposed to recording them themselves. Many drum loops were used without being licensed and the original drummers are still trying to get paid from them.

This led to some drummers creating sample packs for producers. They will record of serious of different loops and drum patterns that producers can take and use for their own recordings. This way, the producer can prove that they have purchased the sample pack and have the proper license to use them for their own work.

Sample libraries may seem like they may be too generic to make creative music from, but this is not true. There are many successful songwriters and producers that have made some great music by using sample packs.

The key is to take a particular sample and make it your own just as you would with any other instrument that you may play.

many people create their own drumsets in Ableton through this method. They will search through recorded music to find the drum sounds that they want to use. Of course, you can assign any kind of sound that you want to the sampler in Ableton Live.

After that, you can take each sample and manipulate it as much as you want to change its character or its length. These samples can then be controlled via MIDI. There are many ways to trigger them. Some people simply use the QWERTY keyboard on their computer. Other people will purchase third party controllers to control the MIDI sampler in their DAW.

One of the beauties of sampling through Ableton is that you can actually record and create samples in the software program. You can go straight out from your record player and record the music from your vinyl straight into the program. After that, you can warp it and select the portion that you want.

Ableton will even automatically go through and select moments in the recording that it thinks could be sampled. Ableton truly is the best DAW when it comes to both creating samples and performing with them.

The MPC may be the most important instrument in the history of hip-hop. The Akai MPC was designed and released in 1988. It was basically designed to be a digital drum machine. The Japanese company created the first version of the device in conjunction with famed drum machine develop Roger Lin.

Since then, many different versions of the Akai have been released. Some of them are heavy duty hardware devices with all the bells and whistles to create a hip-hop masterpiece. Some of the newer models created by Akai are merely MIDI controllers used to control a software sampler being used in a DAW.

There were precursors to the Akai MPC 60. The MPC was the instrument that really changed the course of hip-hop music forever. One of the first and most skilled practitioners of the device was one of the most successful producers in hip-hop history, Dr. Dre. Kanye West is also famous for his extensive skills using this hardware sampler. The most advanced versions of this hardware have almost no limitations when it comes to creating music.

Roger Linn developed some of the first drum machines in history where the user could tune individual sounds on the sampler. It is one of the most popular drum machines used in the 1980s. Its most well-known practitioner was pop music genius, Prince. He used the drum machined extensively on a large number of his recordings in the 1980s and 1990s. Drummers have spent many hours trying to imitate the funky patterns that he created with that machine.

He also created other drum machines in that series. They were later released with the ability to tune each and every individual sound on the sampler. After he was done creating his drum machines, he aided Akai in their creation of the MPC series of samplers.

This is certainly the most popular software sampler available today. Just about every legitimate producer in the world uses this software sampler. It has just about anything that a user could want. A huge library of different sounds, a great sampling engine, and numerous ways to manipulate the different samples.

There are almost 40 different kinds of oscillators that can be used to change samples in the program. Those that have been sampling for a while will also want to take advantage of the multiple different vintage sampler modes found in the software. Kontakt 5 can be used as standalone software. It is also compatible with just about any DAW on the market.

This sampler can only be found in the Ableton Live DAW. The name says it all with this proprietary sampler. It doesn’t have a lot of bells and whistles, but it can perform a lot of simple sampling tasks very quickly and efficiently. This is includes time warping and a few different modulation options.

Simpler comes free with any purchase of Ableton Live. Most DAWs have their own samplers. Ableton has 2 of them. This is the Ableton sampler with the smaller amount of bells and whistles. It does pack a huge punch when it comes to what it actually does, though. Any person that uses Ableton would be well-served to learn how to use this particular piece of software inside and out. It is also important to note that it is very easy to use with Ableton Push, Ableton’s proprietary MIDI controller.

This the bigger of the two software samplers found in Ableton Live. It is much more powerful and useful that Simpler. It is very useful to more advanced sound designers, electronic composers, and producers. The main function that it has that Simpler doesn’t have is multisampling. This is the ability to combine two samples and combine and manipulate them to get a completely original sound.

Sampler is included with Ableton 9 and the Ableton 9 Suite. It has many more analog-modeling oscillators and editing modes. It also provides a much larger number of looping modes as compared to Simpler. If you are new to sampling you may want to start with Simpler and move on to Sampler as you get more comfortable.

The two most common controllers used for sampling are the Akai APC and Ableton Push. They are both used by producers when it comes to living performance. You can run the controllers to a DAW via USB. you can then assign each pad and knob on the samplers to do anything that you want.

Some people use their samplers to trigger different loops when they are DJing or performing their produced music live. Other people will assign different notes or drum sounds to the controllers in order to play them live. The only limitation to these devices is the imagination of the person that is using them.

Knowledge of sampling and the ability to manipulate samples are both necessary to anyone who wants to become an electronic music producer. Like any other instrument, it is important to learn the basics of sampling before you move on to more advanced techniques.

The increased usage of sampling by composers and producers did help create some issues in the music business. Copyright infringement became a huge issue in the music industry. People’s who samples were used for recordings later started suing the people that used them without paying them for the use of the sample.

Some samples are completely unrecognizable in the new recording that they are being used in. These didn’t really create an issue for producers that utilized them when it came to being sued. The problem was the samples that were clearly lifted from popular music before. A great example of this is the “Amen Break” that is used in a huge percentage of drum n’ bass recordings. The drum loop is the centerpiece of the entire genre.

Of course, a producer could be sued for using any sample. The problem proving that it is the sample that is being used. The best producers understand how to take a sample and alter and distort it until it recognizable. This will make it extremely difficult for the artist to prove that their work is being used without credit.

There are enough examples of pieces of music being used without credit that copyright infringement became a very serious issue by the time that the 1990s rolled around. The artistic and the business side of the music industry were complete changed thanks to samplers becoming much more accessible and easy to use.

You will be surprised at some of the sounds that you can get when you learn how to be creative with sampling. They are certain sounds that cannot be obtained through the use of a more traditional instrument.

Just like any other instrument, new and exciting techniques are being developed all the time when it comes to sampling. The key is to keep coming up with creative ways of using it.