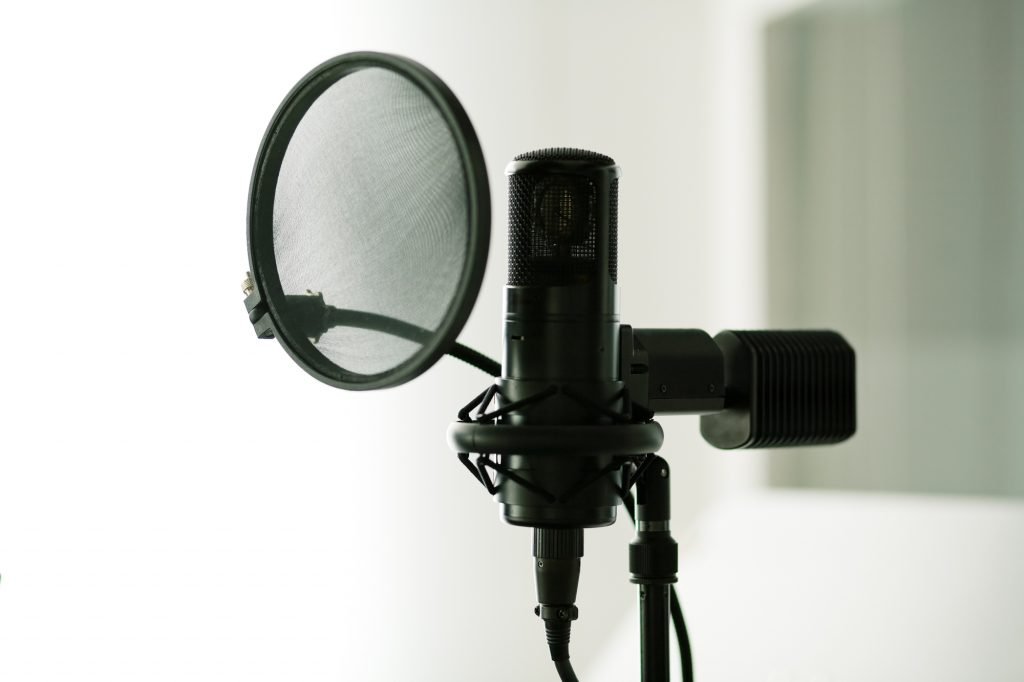 Unless you’re recording exclusively electronic music, you need at least one microphone. In decades past, studio-quality mics were prohibitively expensive for the home recordist.

It’s another age, however, and you can get amazing bang for your equipment buck. Here’s what you need to know, and our review of the mic we think is the best value under $200.

Introducing the Audio-Technica AT2035 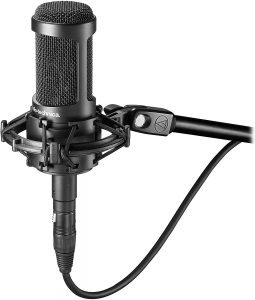 So, what we’re looking for in a versatile and affordable mic is neutral sounding mic that responds accurately to virtually any sound source. And it must come in at under $200.

Yes, it can. The  Audio Technica AT2035 is a side-address, large diaphragm condenser mic that ticks off many of the boxes for any recordist’s basic requirements. 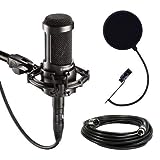 Audio-Technica AT2035 Cardioid Condenser Microphone Bundle with Pop Filter with 2 Layered Mesh and 10-foot XLR Cable
$163.90
See it on Amazon

Now, does the AT2035 deliver the silky authenticity that the industry-standard (and roughly $3000 pricetag) Neumann U87 brings to the game?

Side-by-side, no. It’s not likely you’ll choose the AT2035 as the winner often. However, you will notice that the difference between mics may not be as substantial as you expected.

I’ve said it before. The sonic differences between adequate and great are often dramatic. The difference between great and exceptional is often subtle and sublime. That’s what we’re talking here.

Considering value, then the Audio-Technica AT2035 really shines. Scan user reviews and the acclaim is virtually unanimous. This is a great-sounding mic on a wide range of sources, particularly vocals and acoustic guitars. “Warm” is a recurring adjective, and expectations are repeatedly blown out of the water. It’s a mic with great word-of-mouth behind it.

There are two key differences between the $200 and $3,000 mics, besides the price tag. On the downside, the AT2035 has only a single, cardioid polar pattern. Since most of the time you’ll use the cardioid pattern, this is a worthwhile compromise.

If multiple polar patterns are a deal breaker for you, the AT2050 is a very similar mic to the AT2035, and it’s switchable between cardioid, omni and figure-8 for only slightly more than $200 (There’s also the AT2020, with no high-pass or pad switches that sells for less than the AT2035).

The second difference tips in favor of Audio-Technica. The AT2035 can handle a whopping 158 dB with its pad switched on, a full 31 points higher than the U87. You can use the AT2035 on screaming guitar amps and rock bass drums without worry. The same can’t be said of the big-budget mic.

Why you Need a Mic for your Home Studio 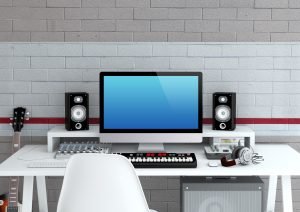 If you play an acoustic instrument or sing, then you already know that a microphone is essential for your home studio. For the non-singing electronic musician, the cost of a mic may seem like a purchase that can be put off. There are, however, strong arguments against this.

Whether electronic instruments are virtual (software apps on your computer) or plugged directly into audio interfaces, there’s usually an acoustic element missing. It’s perhaps best described as “air.” It’s the sound of your signal passing from a speaker to a microphone.

To trained and untrained ears alike, it’s a subtle distinction, but this air adds a quality of depth. In the days of SoundBlaster cards and General MIDI sound modules, you could orchestrate entire productions for playback on a single unit. However, all the sounds came from the same chip sources and there was a two-dimensional quality to even the best MIDI sequences.

That’s less of an issue today, where it’s common to have multiple virtual instruments, with different architectures and synthesis modes, so that sameness is easier to avoid. However, you’re still “inside the box” and you’re unnecessarily limiting your sounds.

As well, microphones take some experience to understand and get the most from. Developing as an audio engineer means knowing how to use mics. Sometimes, it’s not easy to get the sounds you want without plenty of trial and error. Owning and using one or more mics is an essential part of your audio education.

Getting started, you’ll likely prefer one Swiss Army Knife-style mic – a solid performer that gives results regardless of your sound source. When pro studios think about all-purpose mics, they look to trusted products that have been around for decades.

If there’s one mic that comfortably wears the crown as a true all-purpose device, it’s the Neumann U87. However, you won’t find one under $200. In fact, if you locate a U87 at 10 times that price, it’s a fantastic deal. Currently, new U87s sell for over $3,000 on the street.

What makes the U87 the king of the mic scene? Listing its strengths coincidentally gives you a good shopping list for your under-$200 mic. Can you match U87 quality at that price? Nope, but you can apply what you know about the industry standard mic to a product that suits a home studio budget.

Your ideal mic would ideally share some of these characteristics, though of course, specifications don’t necessarily translate to superior sound reproduction capability. But hey, we must start somewhere.

When a musician used to live shows first steps into a studio, they may be struck by the shapes and sizes of the microphones. The traditional ball-style vocal mic may not be present, and instead there are these tubular beasts that you sing into the side rather than the end.

There are two main types of microphone design: moving coil (dynamic) and condenser. Moving coil mics are most common in live music situations. They’re tough and reliable, and the industry standard for live vocals is the Shure SM58, with the classic ball-shape that, for most people, defines what a microphone looks like.

Moving coil mics work on the electromagnetic principle, where sound moves a coil of wire through a magnetic field to convert sound into an electrical signal. The important thing to know about this design is that, since the coil has mass which takes energy simply to move. This means that some sound energy is lost before it can be converted to electricity.

Practically speaking, it’s not a big deal. However, it means there’s a little barrier for truly accurate sound reproduction. These mics tend to have their own personalities and characteristics, and there are plenty of good ones.

The restrictions of physics, though, means moving coil mics tend to have best uses. While you can use any mic for any sound source, you won’t get Swiss Army Knife-type performance from a moving coil.

The condenser mic generates electrical signals using the capacitance effect between two charged plates. It’s a harder concept for many to completely grasp, but simply put, the acoustic pressure on one plate induces electrical charge on the other plate. The amount and importance of plate movement is insignificant when compared with the mass and inertia of the moving coil.

The key takeaway from condenser microphone design is that they are better suited to faithful conversion of sounds to electrical signal. However, not all condensers are designed to be faithful, just as some moving coils can sound very life-like.

If your budget means that you have room for one mic, you can’t go wrong with the AT2035. Like the U87, the AT2035 may not be the best mic for every situation, but it will rarely be the worst choice you can make. Save yourself $3,050 and pick up an AT2035 as soon as you can.