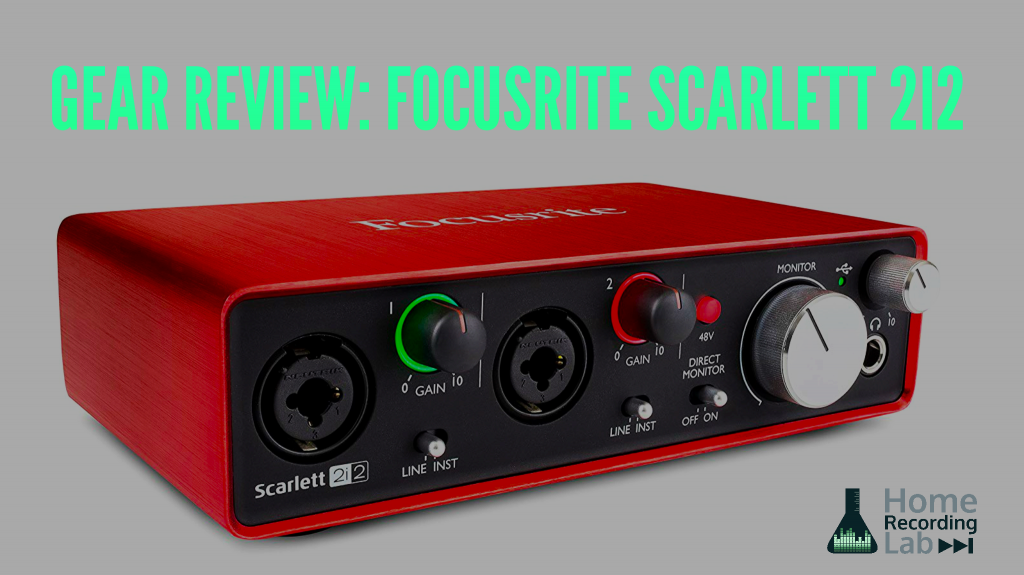 If you’re starting out in the home recording game, you can probably get results from your computer’s built-in sound capabilities, but there comes a point when even the occasional bedroom engineer gets frustrated with the limitations of these onboard wannabees.

If you’re new to the world of digital recording, it can probably feel a little overwhelming. You’re not alone. Even audio engineers who learned their trade in the days of magnetic tape face culture shock and learning curves with digital recording that can be quite humbling.

Setup of the Scarlett 2i2

However, we’re a couple of decades into this computer recording thing and while there’s still plenty to learn about recording music, setting up your Scarlett 2i2 won’t be much of a strain. Take out the red Focusrite USB cable, plug it into the back of the 2i2, then into your computer and you’re ready to go.

While there’s a “Get Started” routine for both PCs and Macs printed inside the lid of the 2i2’s box, my Windows 10 laptop required none of this, recognizing and loading the 2i2 once the connection was made. You may need to go into system settings on both Windows and OS-X platforms to select the 2i2. But you may not. It doesn’t get much easier.

Complete newcomers will want to register their device and then download some or all of the software bundle. At the time of publication, this bundle includes:

No matter what you want to accomplish with your new home studio setup, there’s something in the bundle to get you excited.

The 2i2 is simplicity in action. Plug in a mic. Or a guitar. Or a keyboard. Adjust the gain. You’ll see a green LED halo around the gain knob when a signal is present that turns yellow, then red, as your signal gets too high. Adjust your gain knob until you’re seeing green with maybe a touch of yellow on the very loudest sounds, and you’re good to go.

The Scarlett preamps are perhaps the best I’ve encountered at this price point. Moving from similarly priced interfaces, you’ll probably notice that your microphones sound better. It’s not your imagination. They have plenty of gain, but you may still need an additional boost for passive ribbon microphones or low-output mics such as the Shure SM7. Even with the Gain control cranked, though, the 2i2 doesn’t seem to introduce any distortion or compression.

Guitars and basses sound amazing through the 2i2 when switched to INST level on the front panel. Testing with both a Stratocaster and Gretsch Streamliner connected directly to the Scarlett produced detailed, usable guitar sounds. This is not always the case with audio interfaces, even when they have a high-impedance option.

Latency is a reality of computer recording. This is the time delay that every computer introduces when processing an audio signal. There are a variety of ways to keep latency down, and Focusrite offers a switchable direct monitoring option so you can avoid the slap echo of both the original and processed signals.

However, it’s not magical, and you’ll still hear delay under certain circumstances. It’s an inherent problem with computer recording and an expensive one to eliminate. The 2i2 performs better than most interfaces in its price range.

Are there any Cons of the Scarlett 2i2?

User reviews are often an exploration of extremes. Five stars from people who aren’t really sure what their gear is supposed to do and one-star reviews from those with axes of irrelevancy to grind. Sampling about 70 user reviews from a popular online music retailer shows a plethora of 5-star reviews that actually apply to the 2i2 and several one-stars with comments that indicate the writer might not know what they’re doing, or they’ve received a rare bum unit. Overall, though, the 2i2 scores 4.5 out of 5 stars.

The 2i2 feels like quality, and Focusrite earns its reputation. In the unlikely event the Scarlett 2i2 disappoints you, contact your seller or review how you’re using the unit. Focusrite is one of those equipment manufacturers whose gear is well-built and reliable. If something’s wrong, it’s possible, but not probable that it’s the 2i2.

With a street price around $160, the Scarlett 2i2 is a reasonable route into quality home recording. Yes, you can spend less, but you’ll get less. There are other interfaces out there, similar in quality and features, but these are also priced about the same as the 2i2.

If you’re at the very first steps of building home recording capability, you can find the 2i2 for sale bundled with microphone and headphones, virtually everything you need (besides a computer).

The Scarlett 2i2 is simply an interface product with which you can’t go wrong. And until you need more than two tracks of simultaneous input, you’ll probably never outgrow it. Highly recommended.