How to Properly Mic a Drumset 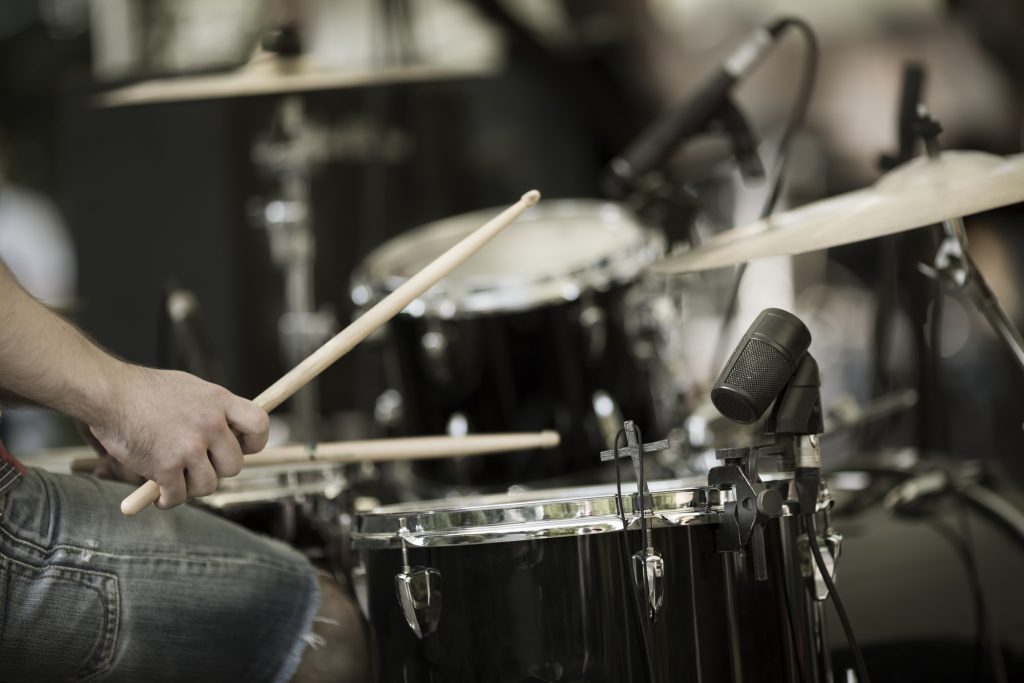 It is true that drums that sound good can really shape the overall sound of a band on a recording. Along with a solid bass track, drums form the foundation of almost any song.

Think of some of your favorite older records. Now think about all of those recordings and what they have in common. If you go back and listen you may notice that they all have a great kick drum and a great snare drum. Without good sounding drums, no one will be able to dance to a great recording.

So, how do you get a good sounding drums?

Some people may tell you that you need a world class studio with a beautiful soundproofed room to record drums in. They rave about how its all about the acoustics in the room. While a beautiful drum room is a great thing to have, most people don’t have such a luxury at their fingertips.

Even with a less than perfect environment (read: most home studios), you can still get a great sounding recording. This article aims to show you some easy techniques you can use to get better sounding drum tracks in a less than ideal room.

Good technique goes a long way when it comes to recording drums. Knowing how and where to mic a drum kit may be the most important aspect of getting good drum sounds on a recording, and this is perhaps one of the hardest things to accomplish whether you’re just starting out with recording or if you’ve been doing it for a while.

How to Mic a Drum Set with Only One Microphone

1. Phasing – You obviously can’t have phasing issues if you only have on microphone. This can be a problem on drum recording set ups that have a large number of mics on the kick, snare, toms, and overheads. This can save you a long time when it comes time to mixing the drums later.

2. Punch – Many think that using only one mic can help you translate the punchy nature of drums into a recording. This actually stems from the phasing issue that was stated above. Phasing does tend to soften the attack of whatever track it is appearing on.

Of course, you are going to be interested in recording drums with more than one microphone. Every good producer is constantly working towards getting new and fresh sounds. Obviously, some parts of the drum are more important than others. This is namely the kick drum and the snare mic. Here are some tips on how to get a good sound out of each drum in the recording micing them individually. 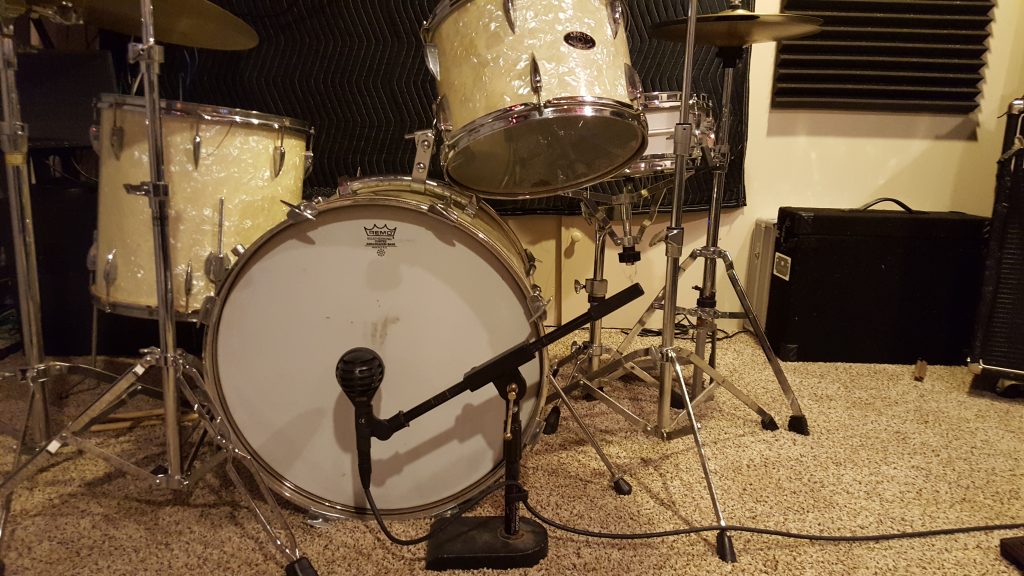 Many producers and engineers consider the kick drum to be the most important part of a recording. This doesn’t mean the best part of the drum set recording. It means the recording as a whole. It is the sound that drives a song and provides the pulse for people to dance or relax to. But, what is the best way to mic a kick drum. Well, it depends on what kind of sound that you want to get.

The first thing that you want to do is make sure that your kick drum is properly tuned. This is the first step towards getting the sound that you want. It is almost impossible to get a good sound out of an improperly tuned kick drum.

For a kick drum recording you are going to want to use a microphone with large diaphragm. You also generally wan the microphone to be a dynamic microphone. The reasons for this is that larger diaphragm microphones can handle a lot more air than condensers mics before the sound breaks up. The kick drum pushes a lot of air. So, this is obviously going to be an asset.

If the drum has a sound hole you can also place a condenser microphone inside the bass drum. This is a great place for a second kick drum mic for a couple of reasons. The first is that is prevents other parts of the drum bleeding into the sound. The second is that it gets a little more definition on the attack of the drum because it is close to the beater. Try using two mics and experimenting in order to get the sound that you want for your recordings. 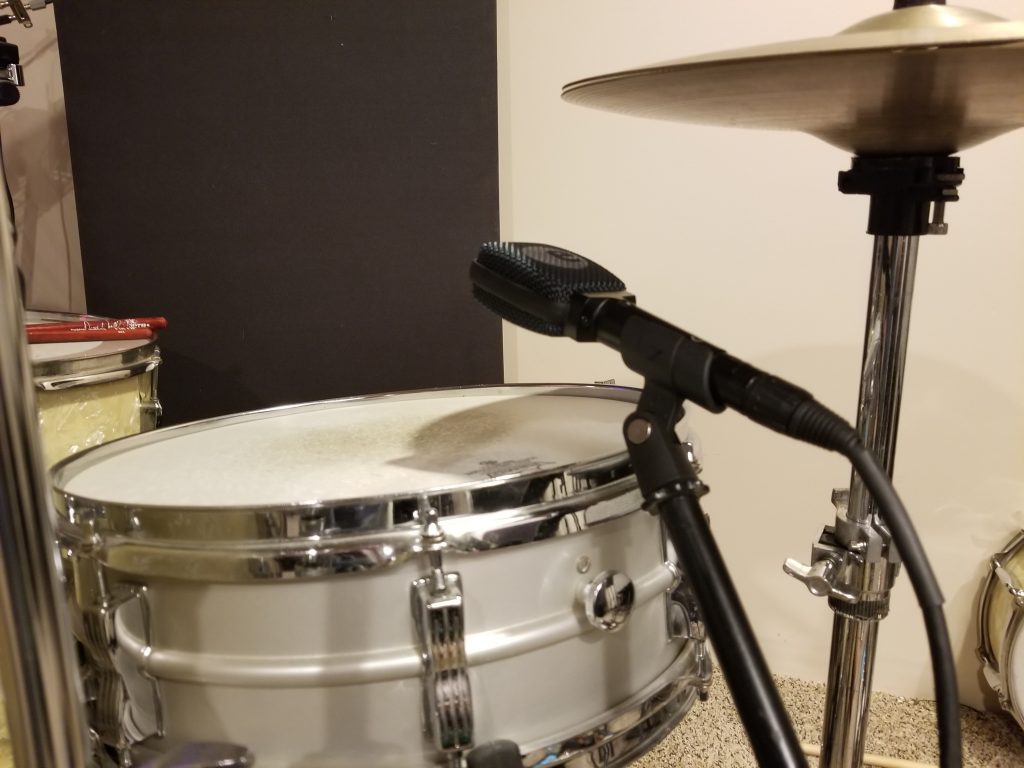 The Sennheiser e906 on a snare drum

The snare drum might be just as important as the kick drum when it comes to sound. A lot of that depends on the style of music that you are recording. A great example of a good snare sound is sounds from old Aretha Franklin records and other recordings from the Muscle Shoals era in R&B. Every producer seems to have a different idea of what is the best way to mic a snare drum to get the desired sound. Here are a couple tips to get you started on the basics.

Like a kick drum, the most important aspect of getting a good snare drum sound is to have a good sounding drum in the first place. Before you learn to record a snare drum you should learn how to tune a snare drum. There are some mics that are better for recording snares than others, though.

The snare drum has very high peak volumes when compared to other instruments in a track. This means that you need a microphone that handles big peaks in volume. This is why it is important to tuse a wide cardiod microphone when you record snare drum.

The snare sound is probably the drum sound on a recording that varies the most from genre to genre. This is why it is a good idea to have a lot of different microphones on hand when you want to try to find the sound that you like on a snare drum. The best thing about trying out different microphones on a snare drum is that its actually pretty fun. You never know what kind of timbre you will stumble upon if you’re open minded.

The first place that you need to mic a snare drum is on top. Everyone at least mics it on top. There are many different kinds of clips that you can buy that fit a snare drum. The distance between the snare drum mic and snare drum can be much smaller than that of the kick drum mic and the kick drum. This is another thing you are going to want to experiment with in order to get the right color of the sound and good balance.

Some producers also like to mic the bottom head of the snare drum. This can help add to the body and low end of a snare drum sound. It is also a catalyst towards getting a punchier drum sound. This is very good for R&B, funk, and hip hop recordings

Another extremely important aspect of recording the drum set. It is sometimes the lifeblood and heartbeat of a good groove recording. It can be mic’s much in the same way as a snare drum.

It is a good idea to use condenser mics on hi-hats. This is because hi-hats vary in sound drastically from one set of hi-hats to the next. A condenser mic can pick up all the color in the hi-hat sound.

Hi-Hats microphones are always placed above them pointing down. Just like the snare drum, some producers also choose to place a microphone under the hi hats as well. It all depends on the color and sound you want to get in your recording. Most people usually use the same mic on both sides of the hi hat.

Toms are the toned drums. Every drummer seems to have a different opinion of how many toms they should use in their drum kit set up. It really depends on the genre of their set up. Terry Bozio is probably the most notorious over-user of toms. He has one tuned to every pitch in the chromatic scale. Wouldn’t want to be that guys drum tech.

There are a multitude of different tom mics available on the market. They usually clip on the tom similar to how a snare drum is recorded. Other producers and recording engineers may also choose to only use one mic to record all the toms on the drum set. This is effective at giving you a little more “old school” sound. This sound is actually gaining in popularity as there is a big retro movement in pop music right now.

The overheads are an area where the most experimentation is needed to get the desired sound. This is because the overhead portion of the drum set is the part that is most affected by what kind of room it is in. Every engineer seems to have a different idea about the proper way to record the various cymbals and percussion that a drummer may be using. It is a good idea to start with condenser mics, though. The overhead mics are used to record all the cymbals above the toms.

The information above should give you a good idea of where to start when you start recording drums for the first time. You may have seen a recurring theme. That recurring theme is experimentation. Any good producer is constantly trying new things and adjusting their set up in an effort to get the best sound or even discover a sound that they didn’t know that they could get before. In an upcoming post, we’ll cover some widely used techniques that you can use to dial in a great drum sound.