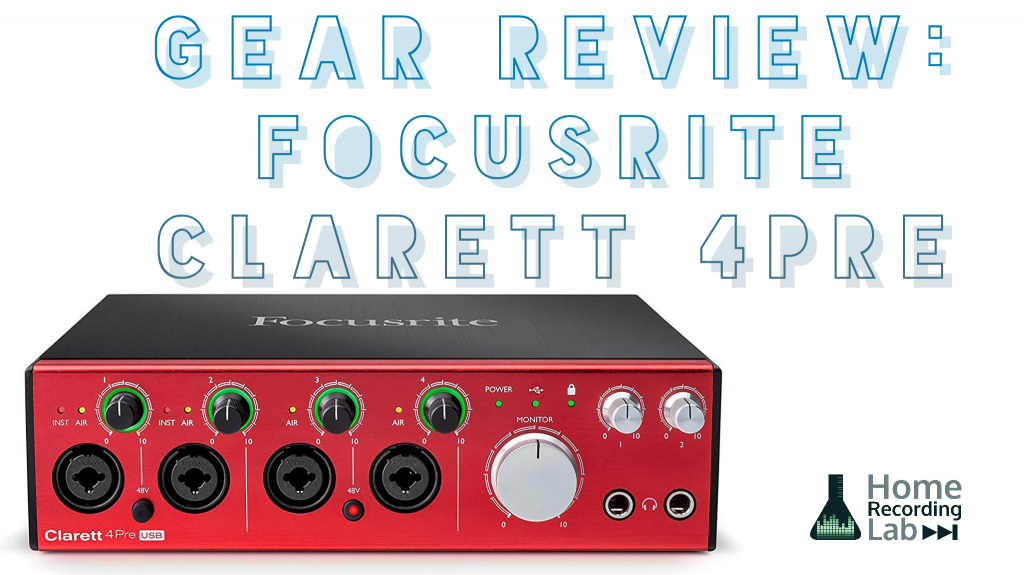 The way I see it, the Focusrite Clarett 4Pre USB 18×8 is aimed directly at the serious home recordist who works mostly alone but does have the occasional need for a big track count. You won’t take the 4Pre by itself to record a four-piece band, but with a couple pieces of equipment, you can still base a serious live multitrack recording rig around this audio interface.

Focusrite is already a solid player in the audio interface game. Its Scarlett series is the most popular audio interface line in the world. Similar Clarett devices can double (or more) the price of the Scarlett line, so is there a point in spending the extra? Let’s have a look.

A Heck of a Balance Between Inputs and Form Factor 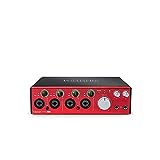 Mac users don’t need to worry about drivers, since the 4Pre is Core audio compliant. Windows users might get plug and play lucky but installing Focusrite Control first assures that you’re good to go. Control also permits various software configuration adjustments, so take the time to install this before you dig in to play. Some features of the 4Pre require access through Focusrite Control.

Don’t throw away the packaging too quickly, either. You’ll have a registration number needed to validate your Focusrite account and access the free goodies that come (and keep coming) with your 4Pre. Focusrite offers one of the better software suites accompanying their hardware, largely due to the Plug-in Collective, which continues to give you offers on free software, special deals, tutorials and more in the months after you have your 4Pre up and running.

Ableton Live Lite is the digital audio workstation (DAW) in the package. Other gems include virtual instruments such as your choice of XLN Audio’s Addictive Keys and audio plug-ins like Softube’s Time and Tone Bundle. There’s even 2 GB of digital samples, so the download time is worth the effort.

Obviously, the four XLR combo jacks are the most obvious indication that you’re not dealing with an entry level two-track interface. You’ll need to take some time to see how the 4Pre and Focusrite Control work together to get the most from your interface.

For instance, phantom power works conventionally, using two lighted switches for on/off function. It’s often common for instrument/line function to be manually switched, as with the Focusrite Scarlett series. However, the Clarett line uses the Focusrite Control app for this, as well as to select the AIR function, an impedance and equalization change that gives multiple preamp voices to your mics, replicating the transformer based Focusrite ISA preamp. Both INST and AIR status are indicated on the front panel of your 4Pre via LEDs, but the switching is done in software.

So, what’s this AIR thing anyway?

Well, it helps take Focusrite Scarlett’s already delicious microphone preamps to a level that justifies the next-level cost of the Clarett line. The AIR function gives you pre-EQ tone shaping through an altered preamp path which beautifully compliments the increased signal-to-noise ratio that Clarett interfaces boast.

For many home studios, the expense of creating a truly sound-proofed recording space is cost prohibitive, so perhaps the 4Pre’s expanded signal-to-noise isn’t a practical consideration, but my experience tells me that better specs often translate to depth and richness that’s hard to quantify. The difference between the sound of the Scarletts and the Claretts is incremental, but that’s generally the way it is with audio gear.

The distance between good and great can be quite wide. From great to exceptional is usually less obvious, particularly to a hobbyist’s ears and, unfortunately, that difference is often expensive. However, the 4Pre has some other attractive features to go along with its superior sound. The 4 combo jacks on the front face may be the first step to a convenient workflow for some. Inherent in the 2-channel interface design is the need for constant setup changes for many users.

Unless you record two channels exclusively, let’s say guitar and voice, you swap out a lot of cables with even modest recording projects. The 4Pre lets you keep a guitar and bass plugged into channels one and two, a couple of mics for vocals and strictly acoustic sources in three and four, and there are four additional line inputs on the rear to handle hardware keyboards or effects unit outputs. MIDI control is a perfect complement for these devices, or for adding a keyboard controller for virtual instruments.

There are still 10 more inputs, but you’ll need to know your S/PDIF and ADAT optical for those. They’re beyond the scope of this article, but not hard to grasp when you have digital-capable gear.

Are there any cons to the Clarett 4Pre?

Given its mid to upper level price point, there are fewer user reviews than more affordable interfaces, but a popular music retailer site offers 4 out of 5 stars over 11 reviews. The low-ranking users gave no insight for their scores beyond an anti-Focusrite bias. Of the 9 remaining reviews, 7 are 5-star, one is 4.5 and one is 3. Take that as you will.

The Focusrite Clarett 4Pre USB is not the most affordable interface with its features, but it’s going to satisfy a lot of critical ears at a reasonable price. It’s hard to top the sound of a Scarlett 18i20, for example, but there’s no question that the 4Pre does. The luxurious load of inputs will tickle anyone used to juggling a 2 x 2 audio interface. There’s a reason why Focusrite is a market leader, and the 4Pre is up to their reputation. If it fits your needs, it’s unlikely the 4Pre will disappoint.