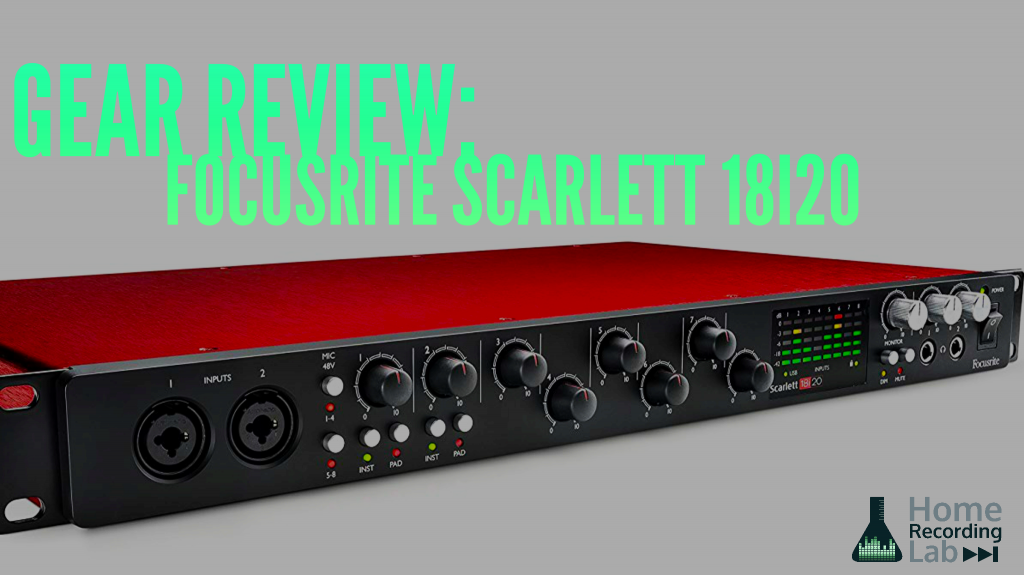 18 tracks of simultaneous USB audio input for under $500? Yes, please. From a reputable manufacturer of high-quality, great-sounding gear? Pinch me!

Yet, that’s precisely what’s on offer from Focusrite with their flagship Scarlett recording interface, the 18i20. This is a serious upgrade from a 2-in/2-out typical USB device, offering 18 inputs and 20 outputs, including eight Scarlett preamps as well as 10 more channels of digital input in two common formats.

There’s simply no standard that every manufacturer follows. While analog audio mixers took on a relatively common form factor that makes moving between brands fairly straightforward, we’re nowhere near this with digital equipment yet, and digital versatility is such that it may never happen.

Setting up the Scarlett 18i20

Focusrite really nails the plug-and-play game when you’re using an 18i20 in a fairly standard configuration with virtually any common digital audio workstation (DAW).

For example, adding the 18i20 to a Windows 10 PC running PreSonus Studio One 3, the computer recognized the interface, switched to it automatically, and then Studio One recognized the unit and adjusted itself accordingly.

This was all BEFORE registering the device and downloading drivers and software from Focusrite’s website. This gave the required in/out routing to handle the eight analog inputs with stereo output directed to both headphones and line outputs 1 and 2, standard for connecting studio monitors.

Adding the Focusrite Control app gives you extensive control over your 18i20, but chances are that any configuration changes you need to make will be within your DAW software, particularly if you’re upgrading from a 2-in/2-out interface.

As well as registering your 18i20 and downloading drivers and Focusrite Control, your purchase includes a nice bundle of very useful software. See our review of the Focusrite 2i2 for more information about the software bundle, which includes a 16-track version of Pro Tools.

Preparing your 18i20 for use with your DAW usually requires some setup in the DAW software itself. Refer to the documentation provided with your DAW for the changes necessary. Given Focusrite’s profile in the home recording market, there is plenty of online help available.

Since the 18i20 has a high track count and plenty of versatility, it’s possible to configure it in plenty of ways, and probably you’ll come up with variations of your own. Let’s concentrate on some of the more common uses and configurations of the 18i20 to serve as a springboard for your customization.

If you’re used to working by yourself in your studio, you’re probably tired of constant reconfigurations and connections if you’re using a typical 2-in/2-out interface. Effective, efficient recording is all about workflow, and re-routing cables can grind productivity to a halt.

The 18i20 gives you the opportunity to sidestep reconfigurations. Say, for example, you typically create a song using drum loops, electric bass, electric and acoustic guitars, keyboards and vocals. While drum loops and virtual keyboard instruments can be manipulated in your computer and DAW, an assortment of microphones and direct connections are common to fulfill your other needs.

With a 2-channel interface, you could use one channel for a vocal mic and the other for a direct guitar connection. However, you’d need to unplug and reconnect to switch to a different mic or to an electric bass. If you want to record the output from an amplifier, you can restrict yourself to using the vocal mic, or reconnect to use a more appropriate choice.

Stereo keyboards mean disconnecting both channels and routing left and right outputs through your interface.

Adding an 18i20 gives you the inputs to sidestep this re-routing. A typical home studio arrangement for the 18i20 might look like this:

You can connect a controller keyboard with a 5-pin MIDI cable through the MIDI connectors on the 18i20 also, for controlling virtual instruments.
With a setup such as this, most of your equipment remains connected all the time. You simply select the appropriate channels in the 18i20 when you’re ready to record a particular track.

Say you want to record a full band. The eight analog inputs on the 18i20 are a good start, but if you’re using a multiple mic setup on a drummer, those eight channels aren’t a lot. You can, however, easily expand using a device such as the Focusrite Scarlett Octopre which offers eight additional analog channels and an ADAT output, which the 18i20 accepts, effectively giving you analog input for channels 9 through 16, a far more luxurious setup for recording a band.

ADAT is an industry standard, so you can accept ADAT input from any manufacturer’s equipment. You’re not tied to using a Focusrite preamp with the 18i20.
Even adding another eight ADAT channels, you haven’t exhausted the 18i20’s inputs. There remain two channels of S/PDIF coaxial digital connection. This is perfect for use with standalone channel strip preamps for, say, vocal mic signal paths.

Some preamps have sound qualities that suit vocals, giving you a wider palette of tone when you’re recording. If you’re using low-output microphones such as the Shure SM7 or passive design ribbon mics, using a preamp may provide the additional gain you need. These S/PDIF connections could also be used for routing audio to S/PDIF-equipped signal processing devices.

The Scarlett 18i20 can also work as a standalone mixer. The Focusrite manual gives the example of a sub-mixer for an onstage keyboard rig, but again the limits are defined only by imagination.
If you’re into surround sound mixing and recording, the 18i20 supports that as well. In fact, with 20 channels of outputs, how you route outputs is even more exciting.

Are There Cons of the Scarlett 18i20?

The 60-odd reviews on a leading online retailer’s site give the 18i20 a very respectable 4.5 out of 5 stars. Negative comments that feel valid seem to refer to the 18i20’s first version. Look for the MkII model to best equip yourself.

Otherwise, the comments speak to the ease-of-use and superior sound quality on tap with the 18i20, comments that apply to all models in the Scarlett line from Focusrite. Deservedly, the 18i20 is a liked and respected multitrack interface.

There comes a time when 2-in/2-out interfaces are claustrophobic. When you’re ready to move up, it’s possible to affordably expand your ins and outs in smaller increments. Even other Scarlett models offer expanded channel counts.

However, with a street price under $500, the 18i20 is very tempting, particularly when those other options give you fewer tracks while still dinging your wallet for a major portion of the 18i20’s price. This is bang-for-the-buck, people, so go big on tracks, modest on price, and go home to have a blast recording.