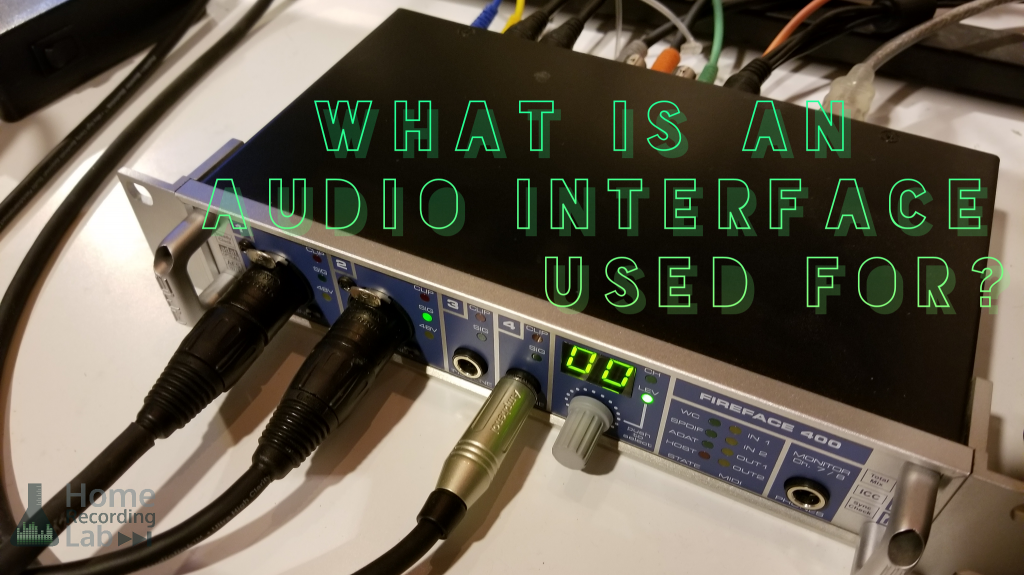 What is an Audio Interface Used for?

It was in the 1990s that home computers became viable recording platforms, and the accessory that first captured the imaginations of budding home studio recordists was the Soundblaster audio card. Though its primary audience was the computer gaming community, the Soundblaster included the ability to record digital audio with reasonable quality through an auxiliary input.

The present-day standard for computer recording combines the functions of a Soundblaster card with the convenience of USB connectivity to create the digital audio recording interface – the essential piece of hardware for a computer-based recording system that allows you to connect microphones and other audio sources to your computer.

Let’s take a look at some of the basic functions of this essential piece of home recording studio gear. 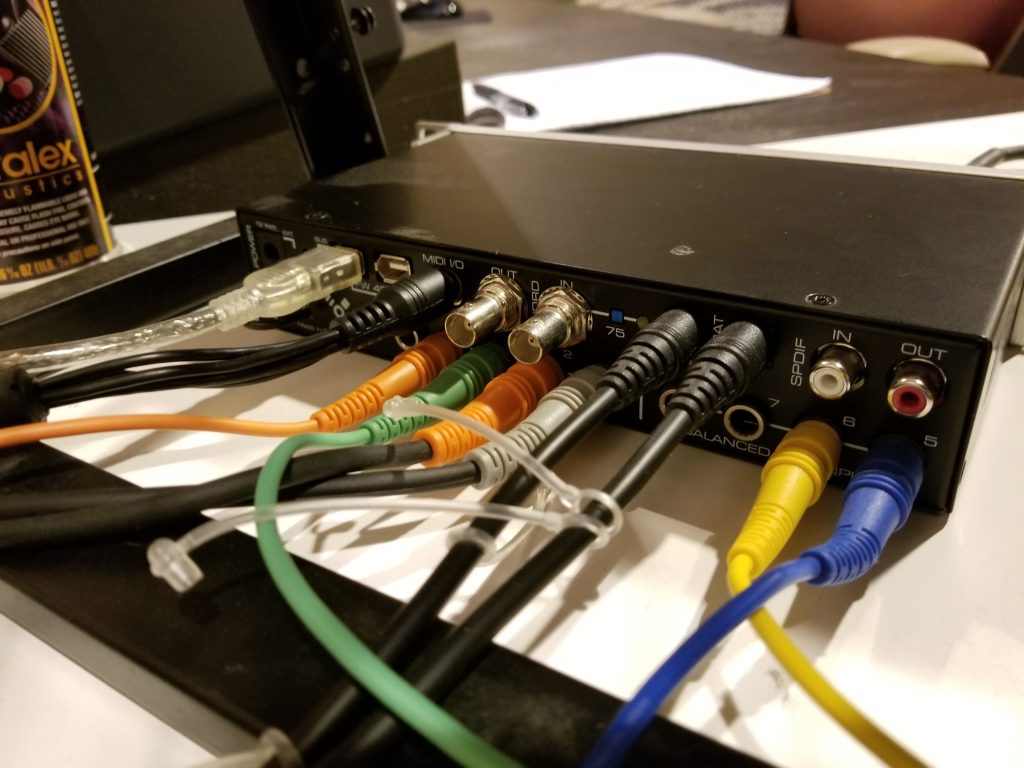 Inputs and Outputs on an RME Fireface 400 Audio Interface

The Essential Functions of a Recording Interface

While computers now ship with the equivalent of an audio card usually built into the motherboard, audio interfaces are now widely available at every price point and provide both quality and convenience advantages over those early Soundblaster cards.
There are three functions necessary from any recording interface as part of your computer recording chain. 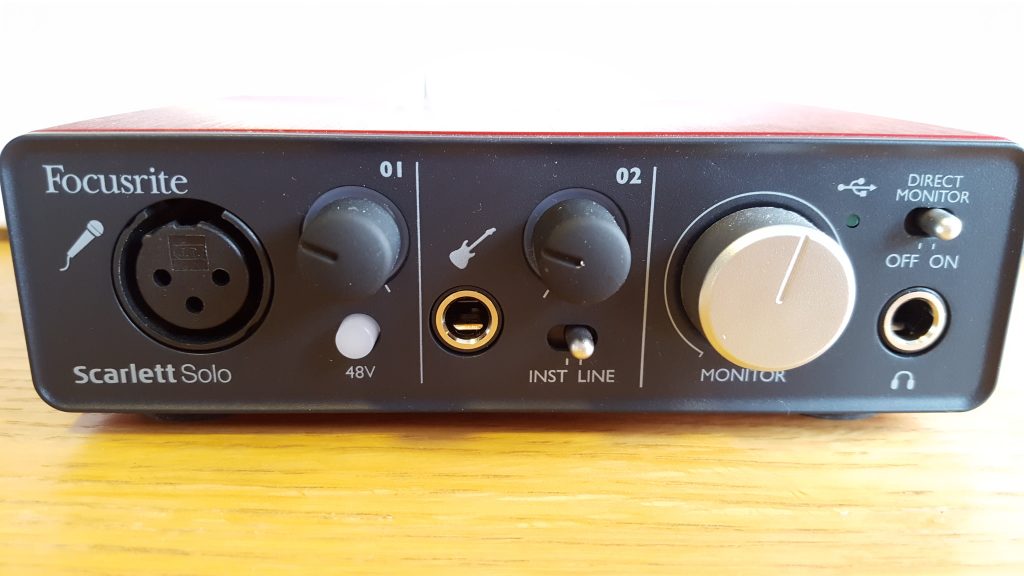 The 3.5mm input jack on a conventional sound card may work in a recording situation, however, it’s neither versatile nor robust. Input handling goes down much easier with practical connectors. Also, you’ll commonly deal with signals of three different types.

The most versatile connector to handle each of these input types is called a combi jack. It accepts XLR and both types of ¼-inch plugs. It’s easy to find recording interfaces under $100 with combi jack inputs. 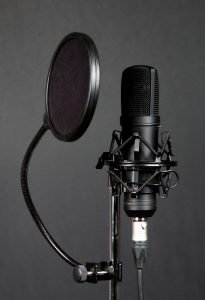 There are three other considerations for your input needs. Microphones need preamplification to convert their low-level balanced signal to line level. Contemporary recording interfaces take this in stride, and often the price of an interface climbs as the quality of its preamp improves.

Since condenser mics are now readily available at many price points, most recording interfaces include phantom power as a standard feature.

Finally, the third consideration remains optional. High-impedance signals from guitars and basses without active electronics, that is, most of them, require preamplification of a slightly different sort than microphones.

You’ll find many recording interfaces feature a switch labeled “Hi-Z,” audio shorthand for high impedance. Enabling this switch creates the right conditions for connecting a guitar or bass directly. While many interfaces offer this feature, it’s not as common as phantom power. If you don’t record guitar instruments directly, you can skip this feature.

Most contemporary recording interfaces have input level controls for boosting or cutting the incoming audio signal. This helps you to keep the signal above the recording noise floor, but below the level of distortion. 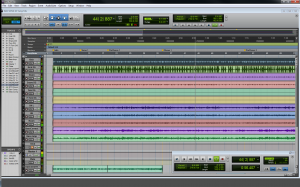 Screenshot of a Pro Tools session

Signals from instruments arrive at your recording interface as analog signals, tiny electrical currents that represent the audio you’ve captured.

Of course, your computer works in the digital realm, so this analog signal must be converted to a digital signal for processing inside your computer.

Similarly, when that processing is done, or when you’re monitoring already recorded audio, the interface converts digital audio back into analog form for playback through headphones or monitors.

Abbreviated AD/DA, these converters have a strong influence on the sound quality of your project. As with preamps, better converters usually mean a more expensive interface, but even affordable interfaces provide reasonable conversion quality compared with the early days of computer recording. 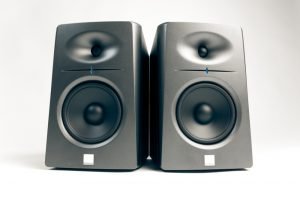 The basic standard is usually two ¼-inch TS jacks for connecting to a stereo amplifier or powered monitors, as well as a ¼-inch or 3.5mm TRS headphone jack. There’s usually a level control for both the monitor outputs and the headphone jack.

There are many, many recording interfaces on the market today, covering a wide range of price points, quality levels and features. For those with more demanding recording situations, such as the need for more than two tracks of simultaneous recording or ultra-high quality, those interfaces are out there and not hard to find.

There’s no need to go overboard when choosing an interface, but selecting something with the highest quality preamps and converters will pay off in the long run.