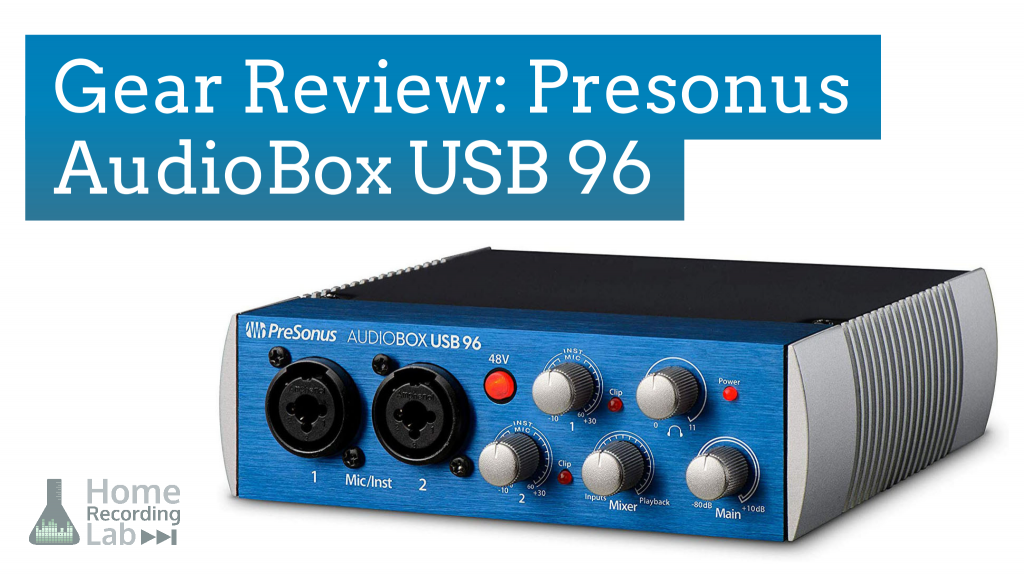 The PreSonus AudioBox USB 96, with a street price under $100, is one of the standouts in the two-channel interface crowd. Here’s why.

Can’t be much easier. Plug in to a USB 2.0 or greater connection (that is, pretty much any USB port on a computer made in the last 15 years). Chances are good you’re ready to go, no matter what platform you’re riding. However, to take advantage of all PreSonus has to offer, register first and start downloading. You’ll be at it for a bit, since there’s plenty available with your purchase.

Windows users: It’s likely that your USB 96 will work just fine when you plug it in but download Universal Control from PreSonus first to assure compatibility and updated drivers. If things ever go wonky, you’ll be updating to assure that’s not the issue, so save yourself the potential hassle now. Universal Control makes for easy work when you want to change sample rates, clock sources or buffers.

Mac users: the USB 96 is a class-compliant Core Audio interface, so you’re good to go at plug-in. You can address any USB 96 setup in your DAW software.

The Studio Magic Plugin Suite is included with your USB 96 package. Though the content may change from time to time, the Suite comes with seven very useful plugin instruments and effects at the time of publication. Rather than being bogged down with new developer offerings that may not yet be proven effective, the PreSonus Suite includes products from industry leaders like Lexicon and iZotope. You’ve got top-end content and tools at your fingertips, right out of the box. Don’t rush past this bundle to get to the fun of your USB 96 or you’ll be missing out on exactly the thrills you’re looking for.

The Studio Magic Suite is an excellent addition to PreSonus’s Studio One Artist software, also included. This is the company’s mid-level digital audio workstation (DAW), the app that you need to convert your hardware (the USB 96 and your computer) into a multitrack recording studio.

Studio One is a name player in the second tier of DAWs, after industry standard Pro Tools. Will it work for you? It’s often a matter of taste and the nuances of what you find to be intuitive workflow. That said, Studio One has a feature set that’s on par with other second tier DAWs. If you’re new to the software, you likely won’t regret the time you spend learning Studio One, even if you end up preferring another platform. And if this DAW clicks with you, you’re working with a full-featured and expandable program that’s well-supported and very capable.

The 2 x 2 interface configuration is about as easy as it gets to work with. You have two mono channels or one stereo channel, as well as MIDI routing. This is plenty versatile for the home recording newbie, and PreSonus quality meets the needs of intermediate and advanced users needing a pared down setup.

Do you record guitar and voice frequently, perhaps song demos? The USB 96 is the perfect interface for this, even if you have another multitrack setup with a greater track count. Plug in a vocal mic and a guitar mic (or an instrument cable from an electric or electric/acoustic instrument) and you’re ready. Leave your gear set up, and it’s a cinch to press Record when inspiration hits. There’s no excuse not to lay down those incomplete ideas for later expansion.

When you’re laying down tracks one at a time, the USB 96 is right there on your desktop, making it easy to swap out connections to mics and instruments. Channel preamps automatically handle microphone and guitar signals, switching impedance as needed.

There one big warning though. Line level signals through the USB 96 are a no-no. Verboten. Off limits. If you need to record a line level source, say a stereo keyboard, for example, you must route it through a direct inject (DI) box to convert its signal to a level that the AudioBox can handle. Failure to do so may damage the preamps on the interface. DI boxes aren’t expensive, particularly not when compared to replacing your interface.

Otherwise, load up your tracks. Key to the overdub process is the mixer knob on the USB 96. You can balance the levels of your overdubbed audio with the level of already recorded tracks. It’s normal to be resetting this frequently, with each track.

Are there any Cons of the Audiobox USB 96?

Through several internet sources, the AudioBox USB 96 scores a consistent 4 out of 5 stars. The naysayers virtually all reflect a lack of understanding about using a stereo interface or unreasonable expectations for an entry level device at this price point. Positive comments tend toward the “easy to use” and “built like a tank” themes.

If you can’t wait to get recording and you’re worried about the cost of gear to get in the game, pick up a PreSonus AudioBox USB 96, and stop procrastinating. Will it suit you forever? Probably not, depending on what you record most often and how ambitious you become about your recording work. This is, however, a first interface you can count on to get in the game on the cheap.