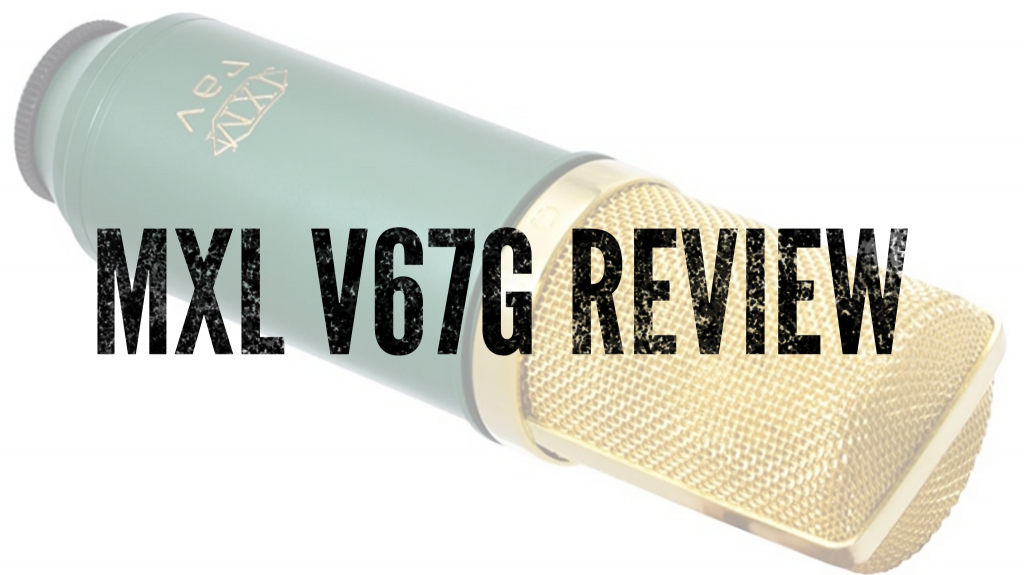 MXL is renowned for their budget-friendly microphones, which are frequently used by creators in home studios. Running at about $99, this microphone is the least expensive in MXL’s V67 line. It was originally just called the V67, but MXL has since expanded the 67 line, and so they changed the name and added the g.

So it’s popular with podcasters, but what about with musicians? With such a low price, does it hold up to professional standards? Let’s take a look at yet another budget-friendly large-diaphragm microphone to see what we can find out!

Who doesn’t want sick looking gear? At first glance, it’s clear that this green and gold-gilded microphone was built to impress. It’s vintage look will get your band attention at gigs anywhere. But does it really sound as beautiful as it looks?

MXL touts it as having an ‘open and pure sound’ and as being ‘old school mellow’. After seeing it in action, I definitely agree. The 67G has a cordial, even sound, especially when used for speaking and singing. It not only looks vintage, but it also sounds like it, in the best way.

Some speculate that the microphone was actually designed after the ever-popular Neumann U87. This mic has a very similar circuit to the one on the U87, called an equalization circuit. The output circuit on this microphone, however, is different. It has an emitter follower, which is what is used in many AKG condenser microphones. And AKG is a serious name brand.

We might not know for sure if this was actually intended to be a Neumann copy, but what we do know for certain is that it was designed with vocals in mind; It is perfect for recording them in most any genre.

I’d recommend this microphone to soprano vocalists in particular. There’s nothing wrong with purchasing a microphone with so much bang for your buck! Studios often use this mic to reduce harshness in higher-pitched female vocals.

This condenser makes mid-ranges sound more prominent, rich and full ( so you won’t get as much unwanted breathy sound in your tracks).

Let’s talk about why:

This mic’s class-A FET design lends well to producing vocal warmth. It also has a built-in EQ circuit like we mentioned earlier. This microphone in particular has a sound that can even be compared to a tube mic. It avoids the harsh, tinny timbre that so many microphones in this price range tend pick up, especially when recording extreme registers.

As far as basic specs go, this equipment is made with 6 micron mylar ,a 32mm capsule, and a 25mm diameter diaphragm. It has a sensitivity of 15 mV/ Pa. This stat is referring to sound pressure and voltage.

Let’s talk a little more on this, in case you aren’t familiar. mV/ Pa is mathematical terms for how microphones take sound pressure deviations (also known as P), and turn them into V, which is our audio voltage. Speaking of which, the V67G requires 48 volts of phantom power, which is typical for many condenser microphones.

Now, back to specs. This mic produces a signal at 200 ohms impedance, and can handle a sound pressure level (SPL) of 130 DB. That’s quite a lot, especially if you consider how economical the 67G is!

The V67G’s frequency response ranges from 30Hz – 20kHz. As far as condensers go, this is pretty standard. This wide range lends well to recording wind or string instruments, such as saxophone and violin.

However, since it is on the lower end of the line, the V67G isn’t without some compromises. We don’t recommend using the 67G for recording drums or bass instruments, as it doesn’t pick low registers up very clearly.

Like the MXL 770, it’s not the best for recording a kick drum, but it would do just fine for instruments like the cello. But if you’re in a pinch, you can use it for recording overhead drums.

Much like the AKG P420 from our previous reviews, this mic features a cardioid pattern, meaning that the bottom center of the microphone is the most sensitive area. The V67G, however, doesn’t allow you to switch between this and omnidirectional (picking up sound from all directions).

So, in short, it is a directional condenser microphone. If you’re looking to do live looping with a microphone, this would be a great choice.

As a side note, this mic is sold with a mic clip, but it doesn’t come with a shock mount like some of the other MXL’s. If you don’t have a shock mount yet, it’s definitely worth investing. Otherwise, you can get extraneous sounds in your tracks, like the dreaded low-frequency rumble. This structure-borne noise can be caused from things like wind, or someone walking around in a different room.

Another accessory you may want to consider adding is a pop filter. Given the fact that this is primarily a vocal mic, the rest is self-explanatory (Get rid of those plosive p’s!). Now, let’s finish up!

The V67G is most at home with high to mid range instruments, and with female vocalists (creating warm and full sounds even in the higher registers). It’s no surprise that this mic is a top seller. Professionals may want to consider a mic higher up in the V67 line, but If you’re looking for a mic that can record your podcasts, vocals and guitar, you’ll be happy. The MXL V67G is a reliable and budget-friendly microphone, as an addition to either your home set-up or studio.